JULY 95
The last four months have been very busy so in this newsletter, I will try and give
you some idea of what has been happening.

turned up as refugees. The night started off with, I can safely say, the largest
newspaper riot in Northland! On Sunday we broke the famine at McDonalds. 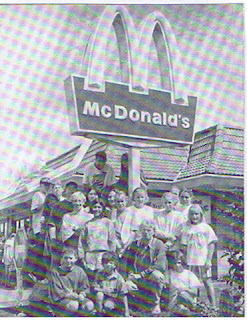 3rd - 7th April A-One Block Course. Straight
after YFC Training, I found myself travelling
with the Auckland Impact Team to Taranaki. We
tried to discover a new way to get there, but
after many windey roads we finally made it!
At A-One Block Course I learnt alot about
myself and working as part of a team. I
sometimes tend to like to do the job myself.

11th April: During the school holidays, I took 30 Rock Solid kids to Waiwera Hot Pools
where we had a good time getting to know our young people while also having fun.

13th - 17th April Easter Camp: I went with my church Youth Group. This was a very refreshing time for me.

18th - 22nd April Awesome Adventure: My sister Nicola and I went to Waiheke Island
to catch up with our parents on their yacht. We had not organised to met up with
them but thought that we would surprise them. We prayed that God would help us find
them, and within 15 minutes of stepping off the ferry, guess who sails into the
bay. Our parents. So we stayed with them for a couple of days. It was neat catching
up. 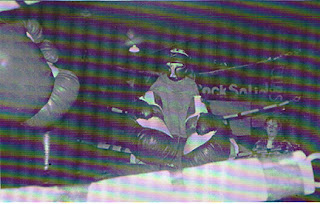 YFC took two buses filled with 103 screeming teenagers and leaders to this
Nation wide Talent Scan in the coldest & windiest part of N.Z. “Wellington”.
Here over 2,000 young people met fran all over the country to compete. It was great.

Monday 5th June - Senior Staff Conference: Garth, Timbo and I said our goodbyes to the buses that headed for home and we stayed on in the ruthless cold for another 3 days.
The conference we attended was for all full time staff around N.Z. and we were also
joined by a couple starting Y.F.C. in Fiji. We had two top-notch speakers ministering
to us. One was Ray Harrision who used to be the YFC N.Z. Director and was also the
Y.F.C. World Director. He hund around people like Billy Graham, and for people that
did’nt know. Billy Graham was the first full time worker for YFC in the States! WOW

Ray Harrison talked about the history of YFC and how much things have changed since
he was working with young people.

Our other speaker was Bill Hogg from Scotland Y. F. C. He spoke of the super importance
of PRAYER. 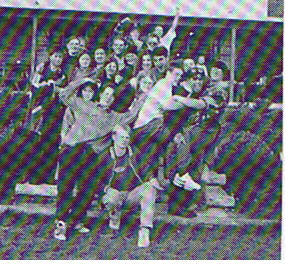 6th - 9th July: Before I knew it, I was once again down country attending our Spirit
and Soul School in Taupo. Northland took 24 keen Christian young people to this camp
designed to encourage young Christians in their faith and witness. Here young peoples
lives were touched and challenged as to where their prayer life was going.

10th - 14th July: Two van loads of our young people stayed on at Taupe Christian Camp
to help the management run a camp for 8 — l2year olds. There were 45 children and

11 of them gave their hearts to The Lord. Isn’t that worth celebrating about!

Well that’s what I ‘ve been up to. A GREAT BIG THANKYOU to all of you that are
getting behind me in my work financially and in prayer.

My van is about to have a new motor put in. I have so far received $600 from my

church which is wonderful, but still need another $500 in order to get the work done.
If you can help in any way, please tear off the slip below and send to:

Email ThisBlogThis!Share to TwitterShare to FacebookShare to Pinterest
Labels: Newsletters Scottie and Renate