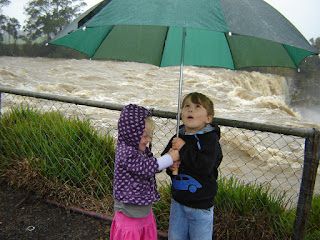 We went for an adventure to go see what Flooding we found around Whangarei.
First on our way to Wairua Falls we had to cross a portion of Road that had been flooded. From that point on the kids were hooked.


Then we arrived at the water falls and were amazed at the volume of water going over the falls. 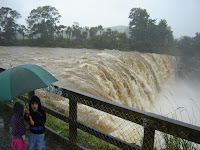 On our way back we decided to go visit Oma and Opa out Hikurangi. Just North of Whangarei in Kauri they were stopping North bound Traffic and Diverting north bound traffic some where out Kauri Road. We continued North the road felt so strange with no vehicles around. We came across Jordan Valley Road which the police had closed looked spectacular with towo police cars blocking the road off and lights flashing and all. 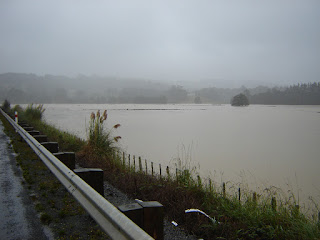 We got to Whananaki road alright (I was also thinking should I go to where the road was closed) continued to Oma and Opas to find the Cutforth farm totally flooded. I call it Cutforth lake. After a quick visit on our way home decided to go to Whakapara where St hway one was closed. Renates brother managers a farm up on puhipuhi and was unawawre he was totally stuck no roads in and out. I also discovered that the Wairua River crosses st hway one at Whakapara the same river we looked at the water fall further South West by Maungatapere.


Places like Kaeo and Kerkeri had very major flooding and were cut off and some places lost power due to rain and heavy winds.